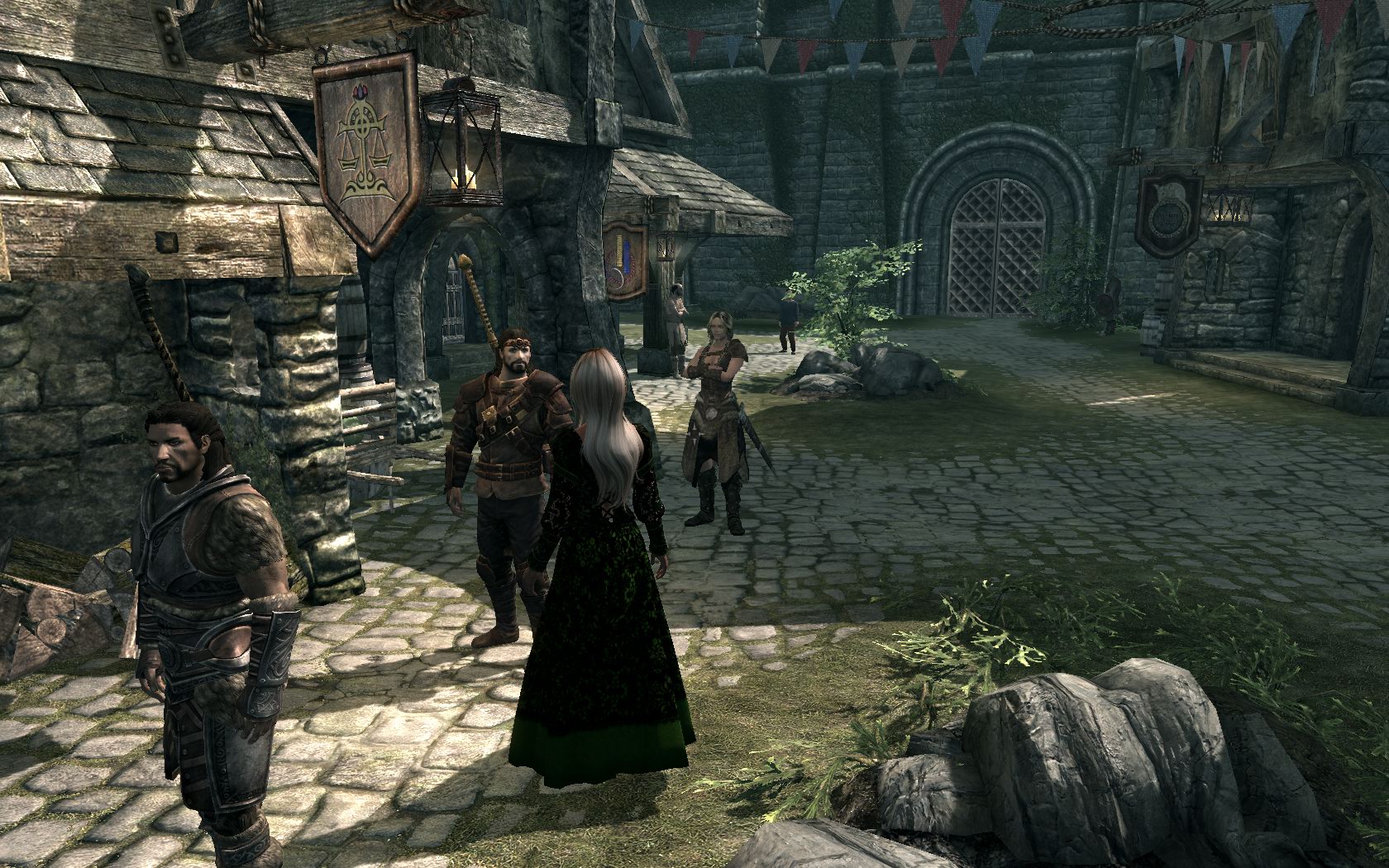 Lurren was leaning back in her chair with her feet against the counter, waving a bottle of wine at Bolund. “I lost Ratsout… yep… gone… lost.. lost… gone.”

Bolund was behind the counter and trying to not sway back and forth while standing with his arm folded. “What’s a ratsout?”

“I don’t know, some weird protégé that Indigoblade found or cooked up. Should probably look for it. It’s an it with it only having its one eye. Brown goldy like one too.” She shook her finger at him. “It’s those minor details that will get you in the end in those pop quizzes.”

Bolund held onto the counter with one hand as he poured more wine for them. “Hated those pop quizzes. Always the questions on the stuff you didn’t study for.”

“Oh you think Ratsout will give me pop quizzes? Personally I think he is a spy.” Lurren almost lost her balance on the chair while reaching for the wine. “Whoa!”

“Hopefully not the Imperial spy Dengeir talks about.” Bolund and Lurren both laughed over that remark. “Are all those people with you?”

“I’m not that drunk!” They laughed while toasting to the invisible people in the room with them that only Bolund sees.

“That group who came with you.” Bolund was rearranging the potions on Solak’s shelf.

Lurrren wiggled one foot to some tune playing in her mind, “Just one is. That ex-bandit. He’s a grump. Somehow he is married to Vilja who says she is my best friend. She claims they are divorced. Since she is the Dragonborn and thane of Whiterun, her housecarl follows to protect her.” Two of her fingers struck the counter-top as the melody only she heard ended. “Nikolai was a plot gone wrong but he sure is a sweetie. Sven is a bard who needs me to pay for all non-bard related items. Vilja recruited him when she foolishly sided with him over another non-bard. Golldir happened when I didn’t. The last two, which are ‘the beat must go on’ Redguard woman and ‘if it’s a male, I’m all over it’ Nord princess. I believe Sven and Golldir brought them in. Hey, I know someone in Riften who can open mead bottles with his teeth!”

“I don’t like this.” Vilja said as she sat down next to Thrynn. “Perhaps we should investigate? Make sure she is okay?”

Thrynn was slowly turning a mead bottle in his hands, “I’m sure she is fine, kitten. Probably should worry more for Bolund.” He looked over at Vilja’s sweet face and winked.

Vilja giggled, “You are probably right. I’m just being silly. However, maybe we should go check?”

“I don’t think so. She is fine.” Thrynn wanted to go and beat Bolund up. He figured if he could refrain from it, everyone else was going to refrain.

“You like those lizard folks?” Lurren was tilting back on her chair with her feet on the table nursing her own wine bottle. “I don’t like them, more provincials if you ask me.”

“Good thing I asked too! I did ask, didn’t I?” Bolund was mirroring the same position Lurren was including his own bottle of wine.

Bolund loved a good challenge and Frostybite was his favorite game. “I can still take you.” He declared while flexing his fingers for a serious match of spider fighting. “Bet you can’t beat me even after watching pros at work.”

“100 gold says I can pin those spider paws down.” Lurren was ready to show this puny weakling the error of his words.

“Ha ha! So! You think you are the Frostybite of Legend? Let’s go!” The two drunks dove in with fingers battling it out. A few time outs were in order for brief sips of wine then it was back to weaving their webs.

Princess was running her finger down Golldir’s armor as he leaned against the tavern bar. “It’s boring in here…wanna go outside and check on DA13?”

Golldir didn’t want to move, he only wanted her finger to keep touching his chest. She was so beautiful with those wild red eyes, a voice that purred like a tamed sabre cat and a floral scent emitted around her. “Why bother with her when you are much more interesting?”

She smiled so deadly at him but he didn’t notice. “Thrynn is taking me.” Her eyes dropped down to avoid the sudden change in his eyes. “Says he is going to take me all the way, too.” Princess loved to juggle the human emotions, watching her victims squirm or shrink under her control.

“Thrynn? What exactly did he say? Did he make inappropriate moves at you?” Golldir was hoping the answer was no since Thrynn was much larger but he would defend her honor if need be.

Princess sucked in her breath then exhaled slowly, “That he wanted me to take it all off so he could take me.” She placed one hand on Golldir’s shoulder to leaned in closer to him. “Said he would help me out in any possible way he could. I don’t feel safe around him.” Golldir decided it was time to speak to Thrynn but Princess held him back. “Not here, sweet one. Stay close to me for now, please?”

Golldir agreed though he knew Thrynn and him would have words over the way he disrespected Princess.

Lurren was sitting on the counter while Bolund polished her boots. “Do you know that I have not updated my To Do list since…forever?” One hand flew to her mouth in surprise. “Oh dear, I forgot the flowers I picked.” She pointed her wine bottle at Bolund. “No need to report those in those reports I should be reporting on. That happens when you have people interrupting you all the time…I mean all the time. Did I tell you about Helgen?”

“Helgen? Heard it was hit by a dragon.” Bolund snapped his towel once and inspected her boot then resumed polishing it more.

“That dragon didn’t hit Helgen, he landed on a tower! I saw it. Had the perfect view of it.” Mentally Lurren left the general store, returning to Helgen where Ralof called to her. While the town was being torn apart from the dragon, the stranger stood strong pleading for her to follow. He was going to lead her out, he was going to be her most cherished friend, and he was going to be where she could find him. She lost Ralof in darkness again, his image gone and Bolund’s came into focus.

He was watching her closely when she stopped talking. There was something different about her, he felt her leave the room yet she remained in front of him. Grabbing a fresh bottle of wine, he tried to open it with his teeth and spilled some of it. Bolund grinned at the laughing bandit hunter who was pointing at the growing red stain on his shirt.

“Once when Thrynn was thin,

A tiny boy he was but then,

He grew up big,

He grew up slim,

But no matter what,

Nadina sang to the big man while beating on her drum along with bobbing up and down to her own rhythm. “I wrote that tonight just for you. Could you tell? That part of it being for you.”

“Negative. All news to me.” He took a long drink hoping she would go away.

“Aw, you are just a grump. Bet I could whip your arse in no time flat. Redguard warrior, we are the best of the best.” She sat down next to him before letting him accept or reject her challenge. “Say, you need a warrior guarding you? Helping out with battles, sing songs to fill long days of traveling, I can even cook. 150 gold and I will follow you to Oblivion and back.”

“Sounds good, see my agent for payment.” Thrynn would not mind seeing Agent Lurren as well. He cursed his stupidity quietly with another drink of mead.

Sven was writing down the song but needed clarification on the last few lines. “Could you sing that song again, please? Just needed to double check my notes.”

Bolund was arranging the empty wine bottles on the floor for their newest game. His balance was a little off but he managed to get them in some sort of order. “All right then. Roll them!” He roared with one fist rising up.

Lurren took the red apple in her hands, rolling it between them then slid it down the floor toward the glass bottles. They shattered, the drunks cheered and Thrynn tossed Sven out of the tavern.

“What was what?“ Lurren whispered back.

Together they crept to the shop’s door and slowly opened it. Sven was brushing off his clothes when he noticed the two faces peering out at him. “Thrynn.” He said while pointing at the tavern. Lurren nodded then pulled Bolund from the door and closed it.   “Grumpy is being a grump again. Hey, it’s not raining!”

Bolund nodded, “It will eventually.”

“Why did you do that for?” Nadina was demanding an answer from Thrynn.

“Ask me again and you can join him outside.” He was in no mood for songs, dancing or even talking to anyone.

“Think I will revise that song instead!” Nadina pivoted on one foot to go retrieve Sven from outside.

“Okay, okay, your turn! Let me set them up then you roll them.” Lurren carefully walked about five steps and gathered up unbroken bottles. “We will name this game The Happy Apple Whack!” She felt a sudden head rush when she bent down to place the bottles. “Ready?”

He continued to wait.

“You going to put the bottles down?”

“Oh.” Lurren remembered what she was going to do and placed two correctly. The third bottle insisted on being a problem until she slammed it on the floor breaking it. “Oopsie.” She said through hair dangling down around her face when looking over at Bolund. “There we go, all ready so whack away!”

The bottles shattered sending glass all around Solak’s normally neat and tidy shop. “Ha! I have the strength of Ysgramor!” Bolund boasted as his apple was destroyed along with the bottles. “Try to beat that, pretty lady.”

“No aunt problime!” Lurren thoughtfully placed one foot after the other to reach the “do not cross” bowling line.

Bolund was busy arranging the bottles when he heard a thump. He looked over to find Lurren face down on the floor passed out.