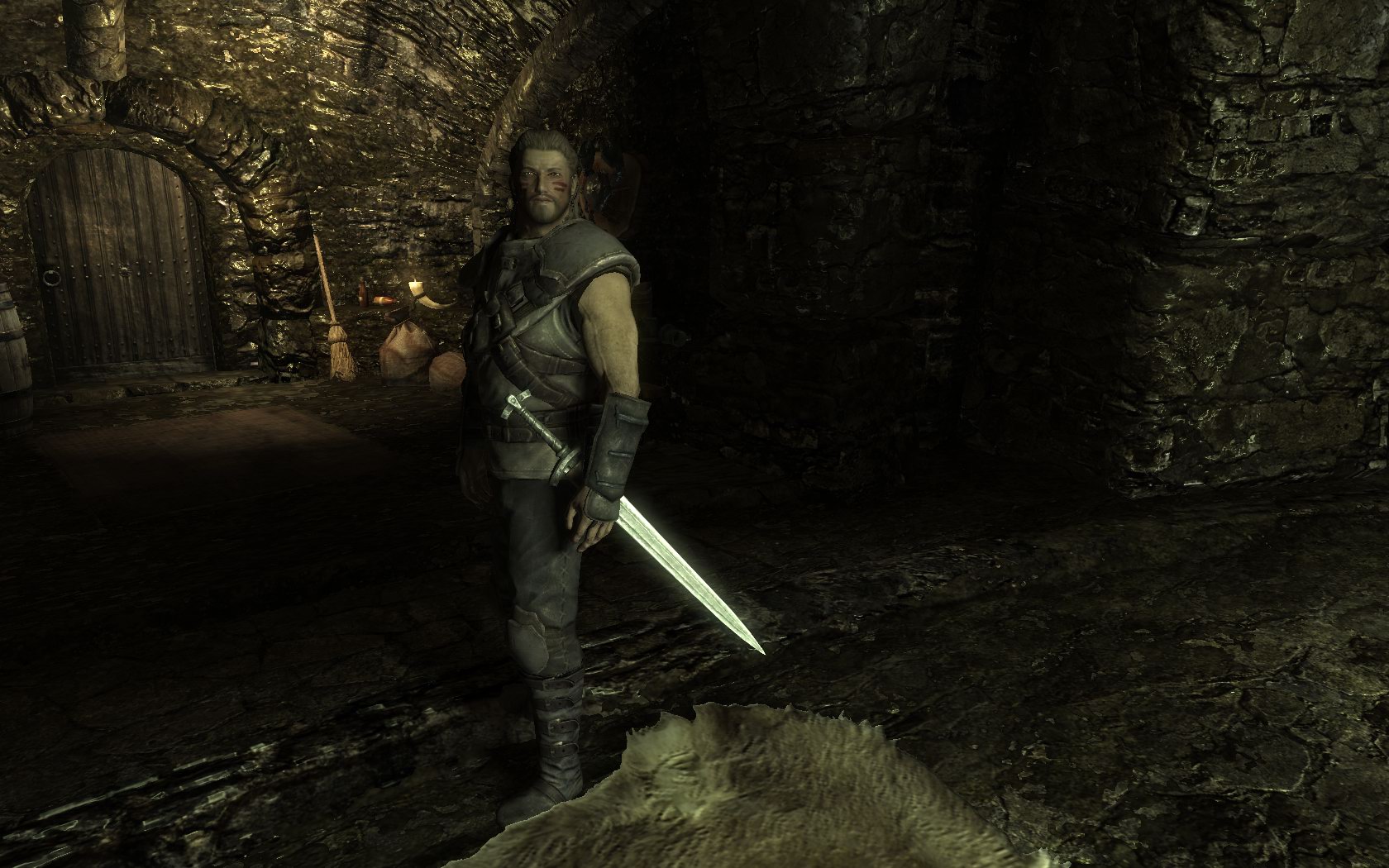 It never felt the same in the Cistern after I returned. Each day seemed longer than the last and every daily routine became laborious. Often times I would lay in my bed staring at the ceiling, listening to humdrum sounds echoing in the domed room. My life had changed by a single event in the shape of a woman.

I lost her in Falkreath. Not in just a single moment when she vanished from my side. My heart was lost to her and it’s lost without her. When she didn’t show up at the tavern the next morning and Bolund had no idea either, I knew. Confirmation of my suspicions came from Narri. She pulled me aside from the others and told me what she had overheard.

She had come into the tavern angry and upset. Some men following her kept telling her to inform Thrynn. The only reply was “You do it.” before Lurren completed purchasing food supplies. Narri didn’t learn what Lurren was to tell me though she did know whom she left with.

He had finally showed up. Nylus. The man she was said she loved. They had left for Falskaar in search of some bandit lord based upon a tip. I knew then it was over for me. She no longer needed the help of an ex-bandit and no longer needed me.

After everyone realized our group leader was gone the spirit of adventuring together seemed to have died. I certainly had no desire to push forward it seemed pointless suddenly.

We all agreed it was best to split up though some teamed together for personal reasons. Vilja wanted to see the Greybeards for training, which Nikolai offered to escort her there safely. No woman should travel Skyrim alone was his reasoning and one Vilja accepted.

Sven and Nadina took in Lucia at his new home, the little cabin called Pine Watch. They plan to teach children the art of singing and drum playing. Lucia is probably their one and only student. Poor child.

Princess left with Golldir to go see his family’s tomb and show her the surrounding area. No doubt in time he will become her feeding toy yet a cruelty that Golldir may enjoy. The lady vampire had smitten the man. He was walking a path with her of no return. I doubt I will ever hear about them again.

Coming back to Riften was met with heavy heart and sorrow. Guess I never thought it would end with me back at square one. Void surrounds my heart as each thought of her pierces it deeply.

Why couldn’t she have been just another woman I had bed and forgotten about? I never tasted her lips or held her close. When it came to Lurren it wasn’t about fulfilling my needs or getting drunk with an overly frisky tavern wench. Brynjolf was right. She was different.

Perhaps it was because she was someone I could not have. She loved only two things – hunting bandits and someone named Nylus. Everything else simply existed next to her. It was those she had eyes for that stayed within her focus.

I have watched the endless stream of possible recruits Brynjolf snagged in the market come through the Cistern. None have been her. Some tried to trick us by pretending to be thieves that would breakout into battle in an attempt to wipeout the guild. None of those idiots lived. Most just joined then went on their way and used Tonilia for their private fence.

One day a woman followed Brynjolf for an introduction to Mercer Frey. She certainly looked different. Her hair was well kept with bangs hiding her forehead, a flawless face glowing of health graced with a smile that only drew your attention to her.

We all noticed her and when Brynjolf told her to pick someone for help with the Goldenglow job, she chose Vipir. He was the fastest she explained and speed is important for some jobs. I was thankful it wasn’t me and patted Vipir on the back in celebration of his win.

However, that celebration didn’t last long because upon their return, Vipir was dismissed and I was chosen. She jabbed my arm several times to awaken me from a deep sleep.

I have been called many things over the years but Mr. Thrynn has not been one of them.

“What’s the matter with you? I’m sleeping here!”

“Since I’m awake guess I have a minute. What do you want?”

“Please get prepared to leave immediately. I need someone to help out and you are prefect.”

Her style was entirely different than someone else and she certainly was direct. How boring.

“You need me to protect you? Be your shield and take the arrows to my knees?”

“If you say so, Mr. Thrynn then yes, that is precisely what I need.”

“And you are a bandit hunter and need me to help you locate bandit lords?”

“If you wish to do so then yes, we can hunt bandits as well.”

“Which division are you from?” I know enough about that OBIS company to know there are multiple divisions.

She seemed embarrassed by my question and struggled to answer. “I don’t belong to any division. What I do is wander Skyrim in search of someone.”

“Who are you looking for?”

Her eyes lit up with excitement. “Dragonborn!”

Now that was different. I can honestly say hearing that word wasn’t what I expected. Admittedly I had hoped for bandit hunter. Damn that woman!

“You are looking for the Dragonborn?”

“Why yes, Mr. Thrynn, I hear one walks among us and I wish to follow and document places/events that occur because of this mystic legend.”

“You need to talk to Vilja. She is the Dragonborn of Legend.”

“No. Not according to my notes. She thought she was but she is not.”

I froze at the mention of note keeping. If this woman carries around books with her then we are going to have a real problem. Still the interesting tidbit of Vilja not being the Dragonborn sparked my desire to learn who it was. It is clear this new recruit knows something that could be useful.

“When I told the Jarl Balgruuf the Greater about a dragon he dismissed it. Someone prior to my arrival had been there and the Jarl said this person saved Whiterun. This was curious to me because a dragon was about so why did he only care about one dragon slayer? The answer is because she was the Dragonborn. Only this person can save Skyrim.”

Well, thank the divines because that certainly omits one woman I know. That news alone made Skyrim safe.

“And you are sure it is not Vilja?”

“Positive. I asked the Jarl where the Dragonborn went. High Hrothgar to speak with the Greybeards. I went there. They have not seen the Dragonborn yet.”

“Perhaps Vilja has not gone there yet.”

“She did as Master Arngeir stated that the woman who show up there was not the real Dragonborn. They could not help her.”

This was troubling information. Delvin Mallory was right. He had heard from his contacts that the Greybeards were still waiting for the Dragonborn. I had assumed Vilja hadn’t arrived there yet.

“Are you sure about it being Vilja?”

“Well no since I don’t know who Vilja is but Master Arngeir stated a woman did show up. Based upon what the Jarl said, I assumed it was Vilja.”

“I will help but you don’t need to call me Mr. Thrynn.”

“Yes this is true however I cannot honor that request.”

“Any particular reason why?”

“I am married and to address you by only your name is not acceptable. Shall we go? There is much we have to do.”

Married…well, just my luck and probably for the better. She didn’t seem willing to stop calling me that so for now I will tolerate it.

“Let’s not waste any time.”

“Agreed. I think the best place to start is Falkreath.”

I froze midway in collecting my belongings. My gut tightened at memory of seeing her at Falkreath for the last time. Is this woman chasing after the woman my heart races for?

“It is rumored the real Dragonborn was never seen again after leaving there. Perhaps someone there will remember her and have some clues where to go.”

“I can tell you about the time I was there with a group of people.”

“Yes, Mr. Thrynn. I am aware. She never arrived in Falskaar. What I want to know is has she returned to Falkreath.”

“How do you know so much about her?”

“Dragons. No one seems to care about them since the Whiterun attack. So I got curious plus making the best of my time here. Anyway, the information I have gathered brought me to you. You were part of that group and someone among you is the real Dragonborn. I just assume it is female because the Jarl of Whiterun told me it was. One has been eliminated while the other has not.”

“In a sense one has been eliminated. The other is Lurren Genadyrose. She’s a bandit hunter working for someone named Indigoblade. Agent Lurren…she always insisted on being called that.”

“Tell me, Mr. Thrynn, is she the Dragonborn?”

I could only shake my head no. It would destroy Lurren is she thought she was part dragon. Each thought of something interfering with her job brought new fears to me. It was becoming more urgent to find her.

“Then let us hunt together and confirm this. It could be the Greybeards were wrong.”